Throughout the 1800s, various men were working on designs for different types of engines and for mechanical vehicles that could be self-propelled. None of these were very successful, until Karl Benz patented his first engine in 1879, in Germany. The first Benz four-wheeled vehicle was built and sold in 1893. Karl Benz is generally considered the inventor of the modern automobile. Engineers in France, Britain, and America were also working on automotive designs during this period. The concept of the production-line automobile was introduced in 1902 by Ransom Olds at his Oldsmobile factory. Henry Ford greatly expanded on the concept beginning in 1914, with his Model T cars that took only about an hour and a half to build on the production line, from start to finish! 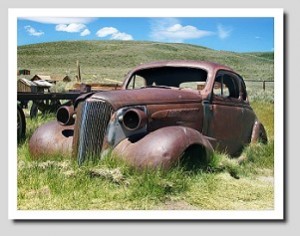 Collectors of antique cars need to consider the period that interests them. Any car over 25 years old is considered an "antique car," while cars built from 1919 through 1930 are sub-classified as "vintage cars." Advertisements for "classic cars" refer to automobiles that were usually high-priced when new, and were built between 1925 and 1948.

To be collectible, any antique car needs to have been restored to close to its original condition, and to be in good running condition. Restoration will require the use of original parts, which may need to be reconditioned to be usable. Reconditioning of such antique car parts has become quite a thriving business. The process of reconditioning is expensive and the waiting time can be very long. Thus, collectors of antique cars have to be not only rather well-to-do, but also very patient.
There are a great many Internet websites devoted to antique, vintage, and classic cars. Some of these sites sell or trade the cars; others talk about them, and about the various organizations that have been formed to bring some order to the hobby of collecting antique cars. The Antique Automobile Club of America (AACA) and the Classic Car Club of America (CCCA) are two of the largest and oldest such organizations in the United States.

Some people buy antique cars with the plan of reconditioning and restoring them, and then selling them at a huge profit. Depending on demand (which fluctuates), this may be a workable plan, and then again, it may not.

Those who begin collecting antique cars with this idea in mind often end up with several automobiles in various states of disrepair, overflowing their garage and filling up their driveway. Storage for such cars is frequently a real problem. It may be better, if antique cars are an interest of yours, to choose just one car and work on that one for fun, rather than expecting to make a profit.

As the industry of restoring antique cars has grown, so has the number and frequency of antique car shows. You can find many websites that provide calendars of these antique car shows in many countries. Some shows are very formal, with judges that select the best car in several categories, and prizes awarded to the owners. Others are just a parade of antique cars down a few streets in a particular town.

Antique car lovers can form a close-knit group, with people from many areas who all share a passion for restoring antique cars. If you think this hobby is for you, expect to meet many folks who love these cars as much as you do. Be warned in advance, however: this is a costly hobby for collectors, and it is critical to be very careful of dealers in services and parts for antique cars.

If you take care, do your research, and expect to spend a lot of money and a lot of time before your "new" antique car is roadworthy and ready to meet the public again, you may find years of enjoyment in working with your antique car.